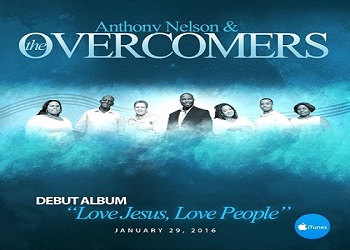 Anthony Nelson & The Overcomers is a contemporary gospel and Christian group founded on the principles of the Living Word, Christ Jesus. Based on 1 John 5:1-5, this ensemble of Christian vocalists believe that those who are born-again believers in Christ Jesus and who have been adopted in the family of God are: 1) victorious, unconquerable and triumphant, 2) loving – love the Father and His beloved children and 3) obedient to God.

The ensemble was founded by songwriter, composer, producer and multi-instrument musician Anthony J. Nelson. After going through a tough season of immense spiritual and emotional pain and brokenness after the early homegoing of both of his parents, the Holy Spirit gave Anthony a vision in January of 2013 to form an ensemble of talented musicians and vocalists who would be committed and passionate about serving the LORD and who would assist in birthing out the seeds of music and lyrics placed in his spirit. Anthony, who comes from strong gospel roots that consist of his late grandmother Mrs. Elizabeth Brown and his late mother Mrs. Joyce Brown Nelson, discovered his musical gifting at the early age of 8 when he started playing alto and tenor saxophones. He later discovered dormant gifts to write lyrics, to compose songs and to play various instruments including the piano and keyboard, bass guitar and guitar.

The Overcomers are currently working on several Spanish versions of their hit singles, as well as three albums. The first album Deeper Experience Vol. 1 is scheduled for release in January 2020, while the anticipated releases for The Cross Vol. 1  is April 2020.

Artist On The Web